My name is Rick Saccone and I’m running for United States Congress.  You may know me already from the hundreds and hundreds of flyers I’ve personally left in your mailboxes, doorknobs, and car windshields.  I’m a retired Air Force officer with vast experience in counter-terrorism efforts.  I think the choice is pretty clear when it comes to who you should vote for in the March 13th special election.  It’s between me, and a guy who wants illegal immigrant drug dealers to take your Medicare payouts and rip your guns away.

Conor Lamb is a great guy.  Really!  He is!  It’s just that he quite literally wants to personally escort Nancy Pelosi into your house so she can give your entire family abortions paid for with YOUR TAX DOLLARS!  I’m a pro-life and a fiscal conservative, so you can see why I’d have a problem with this.

Now, I’m not saying that Conor Lamb is the anti-christ but consider this: the book of Revelations says that the “Lamb of God will break the Seven Seals ushering in the four horseman of the apocalypse.”  Uh…Lamb….Lamb?  You don’t have to be a genius to see the similarities.  If I was a betting man, I’d bet that if you elect this guy on March 13th, the sky will crack open and a thousand three-headed dragons will swoop down bringing pestilence, famine, war (he’s not all bad) and death.

I think I’ve made a strong point as to why you should vote for me, Rick Saccone, to be your next congressman.  But if you’re still not convinced, here’s a handy-dandy chart. 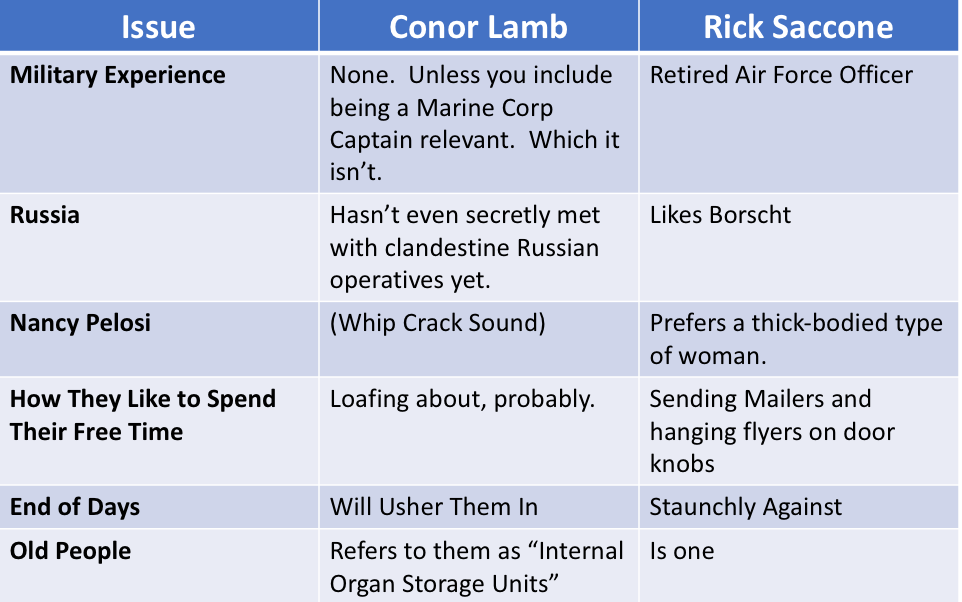 See you at the polls!