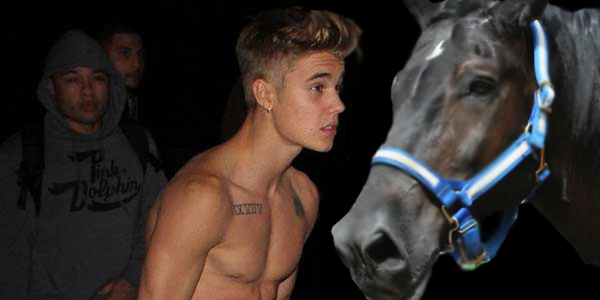 Miami, FL – After becoming the first horse in over thirty seven years to win the Triple Crown, American Pharaoh’s night of celebration was cut short after a run in with Justin Bieber and his entourage.  The singer, in town for his “Journals” World tour, reportedly attempted to take over a VIP section where American Pharaoh and a few close friends were congregating.  The horse, perhaps still coursing with adrenaline from his win at the Belmont Stakes, took exception to the perceived slight and began whinnying loudly at the teen icon.  Bieber’s entourage swooped in to his defense only after Pharaoh emitted three loud nasal snorts, indicating that horse felt threatened .  Rapper Big Sean and 2009 Kentucky Derby winner Mine That Bird were at the frontlines of the conflict in Pharaoh’s camp.  Patron’s overheard Big Sean calling Bieber a “bitch” while Mine That Bird neighed and stamped his hind legs repeatedly.

Club Security was able to break up the altercation and send both parties on their way.  Justin Bieber has already apologized on twitter exclaiming, “Got much luv for American Pharaoh.  I’m disappointed with myself.  I’m better than this.”

When asked for a comment American Pharaoh let out a soft nicker, produced when a horse creates a vibrating sound with his mouth closed using the vocal cords.