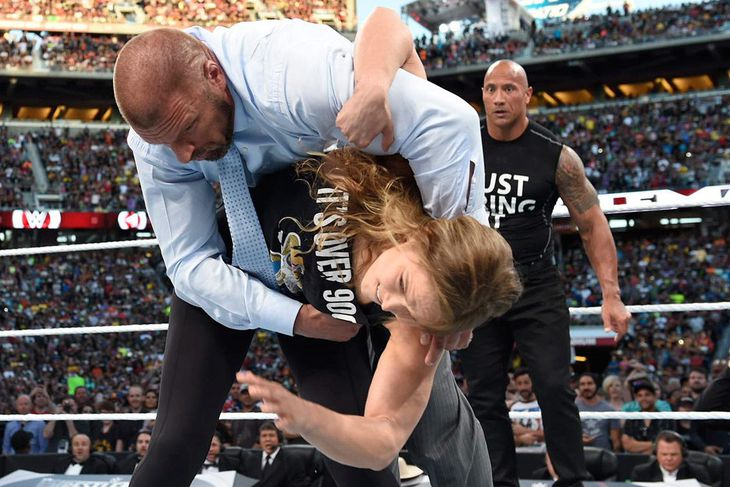 “I do not entertain hypotheticals. The world as it is is vexing enough.” – Kristopher Tapley

Luckily I do deal in hypotheticals, Kristopher Tapley, whoever you are.  In fact I’d say that 90% of my day is spent thinking about hypotheticals.  Who would win in a pie eating contest: a horse or a zebra?  How far could I realistically throw a boomerang? Et Cetera, et cetera.

The title question was posed last night while me and a bunch of other nerds who somehow found women to marry us watched WrestleMania 31.  The night featured a promo where Rhonda Rousey, reigning UFC Women’s Champion, hip tossed WWE legend, Triple H.  One of the attendees believed that Rhonda Rousey would “murder” Triple H in a real fight.  This statement immediately divided the room and led to many arguments for an against.  I’d like to break down a tale of the tape and see who would come out on top.

I’m going to preface the rest of this argument with a hypothetical set up just so sensitive people don’t get bent out of shape about a man potentially beating a woman. In this imaginary scenario, Rhonda Rousey has started the fight with Triple H.  Still not enough?  In this completely made up, fake, imaginary scenario, Rhonda Rousey has Triple H’s father at knife point and is threatening to kill him if Triple H does not engage her in hand-to-hand combat.  There.  I think that’s enough for us to explore this imaginary scenario without everyone getting all sensitive  Again, this is imaginary.  Just one more time for the people already drafting e-mails to Salon.com: Rhonda Rousey is a hot-headed, potential murderer and Triple H is just trying to save his dad and this is imaginary.

The most obvious argument for Rhonda is that we have actual proof of her domination during combat.  As both a decorated Olympic Judo Champion and UFC Champion, she has definitely proved that she is a force to be reckoned with.  Rhonda is both a skilled striker and grappler, most recently making Cat Zingano tap out in 14 seconds from an arm bar.

Rhonda also has the age factor going for her.  At 28, she is in her prime and her body would likely be quicker and in better shape.  If the fight lasts more than five minutes, Rousey could wear out the much older pro-wrestler.  If Rousey were to use her muay thai kicks, she could also potentially cause knee problems that would multiply later in the fight.

Number one thing Triple H has going for him is that he’s an absolutely gigantic, muscle-bound guy.  I know Rousey is cut and conditioned and everything but I’m pretty sure Triple H could literally smush her head if he got a hold of her.  This isn’t just because he’s a man.  It’s because he’s a freak of a man.

Also, wrestlers probably don’t get enough credit for being tough.  Sure they pull punches in the ring, but you can’t fake getting slammed over the back with a steel chair or getting dropped on thumbtacks.  In my opinion, Triple H probably has the edge in pure toughness over Rousey.

The only thing preventing me from saying Triple H would be a clear cut winner is this video from one of the very early UFC fights.  It features gigantic tough-guy Kimo Leopaldo vs. little tiny Royce Gracie.  Technique really is everything.

So I’m at a deadlock.

I called my buddy who originally posed the question and asked him what he thought.  He said Rousey would absolutely kill Triple H.  “Triple H has never been in a real fight.  Rousey would kill him.”

“Could she beat the Rock in a street fight?” I asked.

Right before I posted this I saw that buzzfeed had a similar post called “If All Disney Princesses Were Sloths.”  I know it’s kinda the same thing but I spent an inordinate amount of time in photoshop doing this so you’re going to look at it and LIKE IT!!!

Omaha, NE – The Kansas Jayhawks, a second-seeded NCAA Basketball team, suffered a crushing upset at the hands of rival Wichita State earlier this evening, bringing a terrible shame upon themselves, their school and their respective families.  Motivated to purge their embarrassment, the entire fifteen-man roster decided to commit Seppuku during the media’s Q & A session after the game.  Plunging short swords into their abdomens one by one, the disgraced basketball players summarily cleansed themselves of the public humiliation by bathing in the agony of cold steel.  Equipment manager Lena Thompson served as “second” for members of the team, mercifully lopping off their heads with katana blades after the initial screams of anguish had subsided.

“We were out-scored, out-rebounded, and just plain out-hustled by our bitter enemies,” said head coach Bill Self.  “We have molested our honor by such actions.”  Coach Self then wrapped a blindfold around his eyes, knelt on the ground and made a deep, left-to-right gash across his abdomen.

The ceremonial disembowelment was shown live on Tru TV, a subsidiary of CBS and was followed by “World’s Dumbest Criminals: Las Vegas Edition.”

Two hunters are out in the woods when one of them collapses. He doesn’t seem to be breathing and his eyes are glazed. The other guy whips out his phone and calls the emergency services. He gasps, “My friend is dead! What can I do?” The operator says “Calm down. I can help. First, should make sure he’s dead.”

There is a silence, then a gun shot is heard.

Back on the phone, the guy says “OK, I’ve shot my friend in order to make sure that he was dead, per your request.”

“Oh, no!” said the operator.  You’ve mistook my directions and now tragedy has befallen you both.  For my role in this farce I will join the ranks of the accursed!  Forever will I gnash my teeth in agony over this morbid, albeit comical, happening!”

“Damn my ignorance!” cried the living hunter.  “What am I to do now?  This black mark on my soul will surely torment me until my final days on this tainted blue orb!”

Toledo, OH –  Local boyfriend Tad Lubecki failed to connect with Thomas O’Malley, the father of his girlfriend, by showcasing a fleeting knowledge of the WW2 aircraft.  Despite throwing out terms like “carrier-based naval bombers” and “rotorcraft,” the 22 year old liberal arts major was not able to spark a conversation with the 65 year old father and retired bricklayer.

“I kept trying to get him to open up by saying things like, ‘For my money, the best transport glider hands down was the Russian-made Gribovski G11,'” said Lubecki.  “But the guy didn’t bite on anything.”

The conversation took place as they both waited for Lubecki’s girlfriend, Lisa O’Malley, to get her purse from upstairs.  O’Malley had previously warned Lubecki that her father was “into the history channel and stuff.”  Lubecki developed a plan should he ever have to interact with Mr. O’Malley, which involved stopping by a Barnes and Nobel and reading two pages from The Black Sheep: The Definitive History of Marine Fighting Squadron 214 in World War II. Lubecki internalized a handful of random facts, hoping that his use of these terms would gain him some credibility.  Unfortunately for Lubecki, the stoic O’Malley did not return the volley of conversation starters.

“He asked me some follow up question about diesel shortages in the Pacific theater and I just froze up,” said Lubecki, who was visibly shaken.  “I think I mumbled something about how I liked his mustache and just decided to wait in the car.”