LinkedIn is a great place to network.  It also attracts some of the most ridiculous people on Earth.  In my opinion, it’s a bone yard where corporate-speak goes to spawn with degenerate “innovators”.     This is how I view most people on LinkedIn. 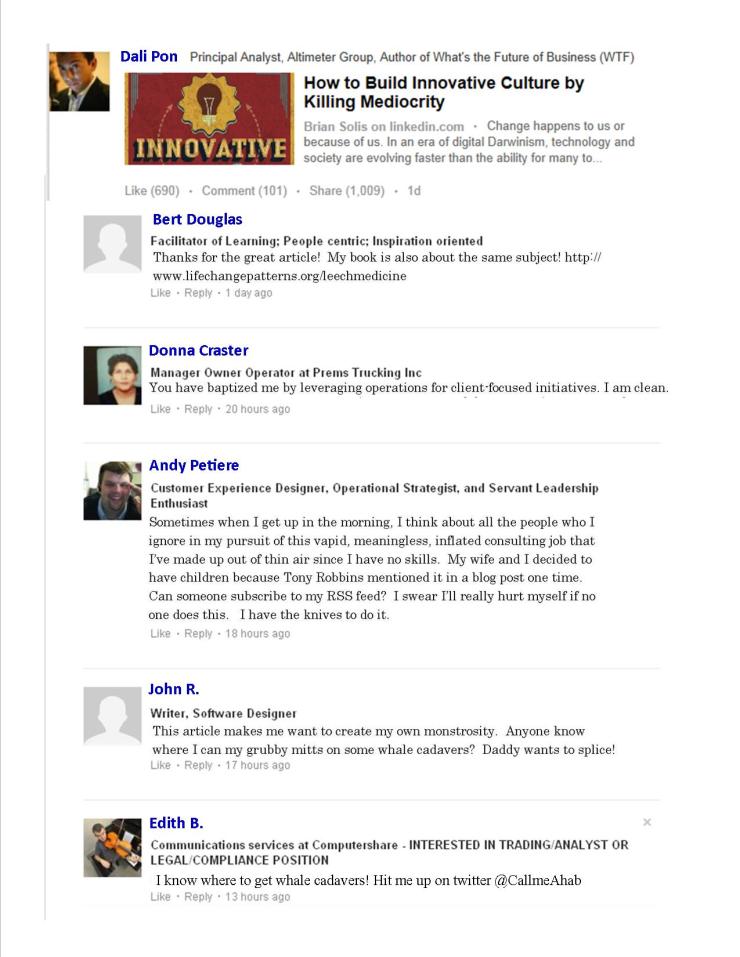 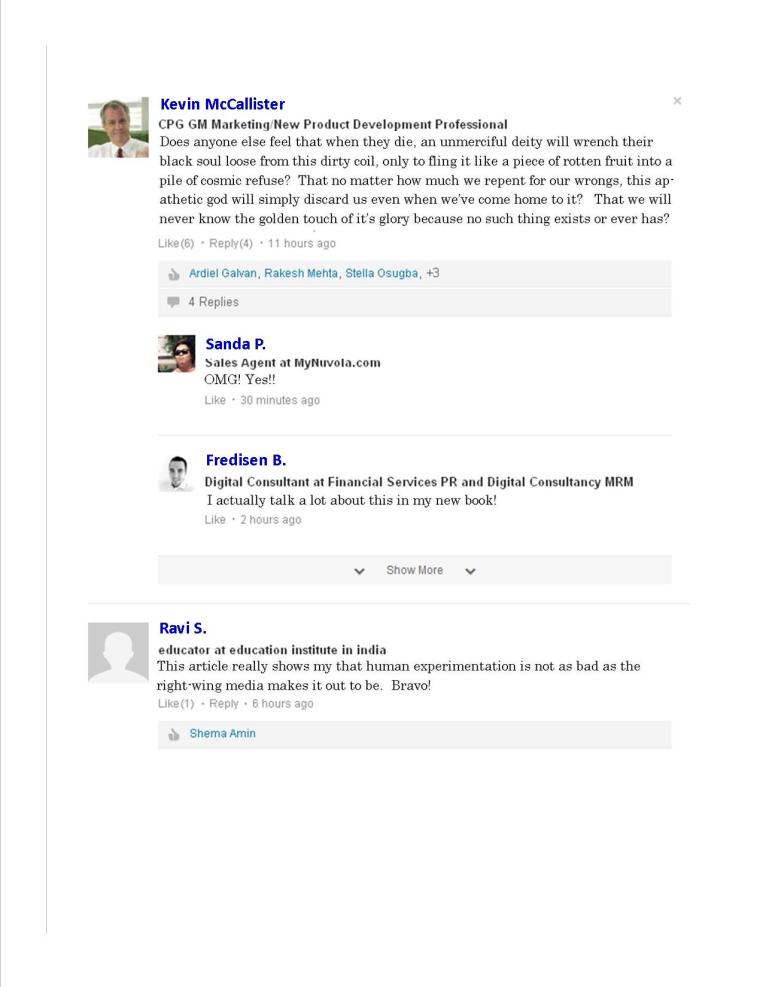 I’ll be opening for Dan St. Germaine this weekend at the Pittsburgh Improv.  Two shows on Friday and Saturday then one on Sunday.

Dan’s pretty heavy into the New York scene and he’s been making waves for the past two years.  He’s performed on Jimmy Fallon, had his own Comedy Central Special and Variety named him one of the “10 Comics to Watch.”

Come check us out this weekend. 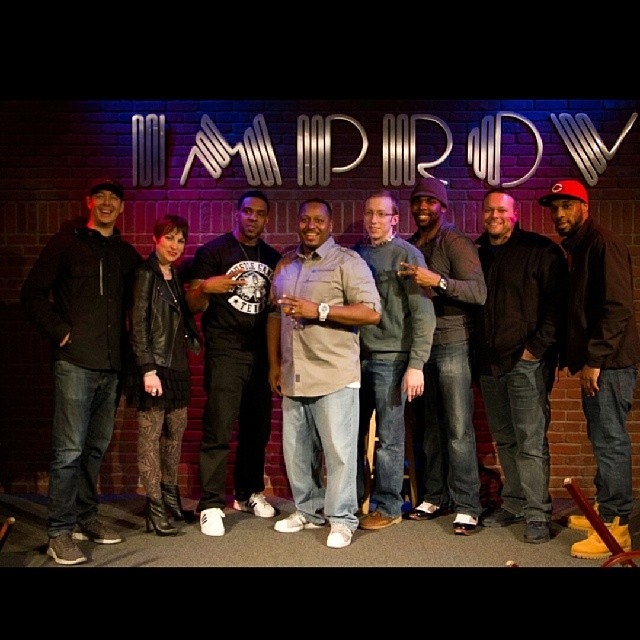 It’s funny how things work out. I went to the Improv last night to pick up my 1099 form. When I walked through the doors, I basically saw all of the dudes that I came up through the ranks with. Terry Jones, Bill Crawford, Jerry Wilson, T-robe and Aaron Klieber (and relative new-comers Ed Bailey and Holly Price). It’s practically impossible to get all of us in the same room so someone decided to take a picture. Good call. It was weird because I’m so proud of what everyone has been able to accomplish, but also a little sad that the days of us sitting in a dive bar, watching each other perform and laughing hysterically had become a little less frequent. These guys were important to me in my early days because they were good. Really good. And we all benefited from pushing each other.

It wasn’t just a gathering of comedians. In a way, it was like a little family reunion.

The pleasant chime of the doorbell was a sweet sound for Ann Coulter.  “This has to be him,” she thought as she clasped her cardigan to her body and padded towards the foyer.  It was still cold in the house and her moccasins did little to rid the chill from her feet as they scuffed forward.  The polarizing news personality peaked out of a side window and squealed with delight.  The big brown truck outside was finally here.  “Yay!” she clapped her hands together in rapid succession.  She whipped the door open to find a middle-aged delivery man waiting on her stoop with several large boxes on a dolly.

“Sign right here and I’ll take these in for you,” replied the UPS Driver.

Ann signed the tablet, placing an excited underline beneath her last name.  It was times like these when she felt like a little kid again.  She rarely got the chance to be excited about anything anymore.  She was successful yes, but she drew the ire of many people on the way there.  Someone called her a “hatchet-faced goblin” at her last book signing event.  Another person had attempted to throw some type of high-acid cleaning solution on her as she retreated to the tour bus.  Liberals.  The uncivilized, unwashed masses.  She persisted though.  And once she arrived home, all was quiet, all was right.

“You can take them back to first room on the right,” she said.

“Are you having some sort of theme party?” asked the driver, as he wheeled the dolly through the high-ceilinged foyer and into the hallway.

“The office is just through that door,” Ann instructed to the driver.  “Just leave them in there and I’ll unpack them.”  The driver noticed a sweet smell coming from the room.  He turned around and bumped the door open with his rear, pulling the dolly in backwards.  He turned around and saw thousands of bananas strewn about the office.  The fruits gave off a varying array of colors and smells.  Some were still green in their infancy.  Some yellow and ripe.  Most however, were black and brown, rotting in the stale room.  The UPS driver turned around and showed himself out in a hurry.

Ann Coulter gave another short clap as she bent over the three large boxes.  “Yay!  More greenies!”  Her moccasins squished on the decaying peels as she ripped the tape off the packages.  The Dole logo was stamped prominently on the front.  She pulled out a wonderful bunch of six green bananas.  They were heavy and of good quality.  She plucked on banana from the bunch and rubbed them against her neck.  The taut green skin rubbed smoothly against hers.  She pulled the banana up to her nose, gave it a quick sniff and threw it onto the decomposing pile in the corner of the room.

“Soon I’ll have a garden!” she sung to herself.  “A lovely, lovely garden!”

Metropolis – Forbes has released its annual list of the “Most Livable Cities.”   The magazine measured five data points in the country’s 200 largest metropolitan areas including unemployment, income growth, cost of living, cultural opportunities and crime.  Topping out the list of most livable are Portland, Oreg., New Braunfels, Texas, West Madison, Wisc., and Westminster, CO.  Gotham City earned the dubious distinction of “Least Livable.”

Gotham was docked points for its high frequency of “Madmen Rampages”

City Mayor Harvey Dent seemed relatively unconcerned with the results of the annual review.  “Gotham has a thriving art scene as evidenced by our many, vulnerable and defenseless art galleries,” he said when reached for comment.  “Opportunity abounds for those willing to work for it in Gotham.  We have had more low-income individuals become millionaires than other city, although some say that statistic is correlated with our high frequency of theatrical bank robberies.”