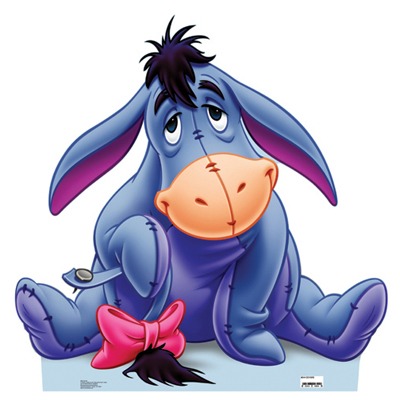 Today was just like any other one: drab and depressing.  The doctors have put me on Paxil and Valium but that hasn’t worked so far.  They only produce a chemical fog in my mind that treats the symptom, giving me some brief moments of clouded levity, but it doesn’t solve the problem.

After some deep introspection, I may have discovered the root of my depression.  I’m starting to think that I’m make-believe, not real.  Sure, I can see sights and hear sound and feel the pain of my tail being pinned onto me, but I have this unshakable feeling that I am just a figment of someone’s imagination.  I’m a ghost donkey in the mind of some entity.  Even more haunting though is that I think I know the mind from which my existence stems.  He walks among us in the forest.  His name is Christopher Robin.

I’ve had conversations with Tigger about this and he just brushes it off like its nothing.  I said, “Don’t you feel like there’s something very wrong in our little world here?  Like we’re marionettes on lines of invisible cord?  You, me, Piglet, Kanga and Roo?”  He acknowledged the feeling but he didn’t care!  He didn’t care that he might not be himself, that he might just be a collection of thoughts constructed by a 7-year-old boy.  I sometimes feel as though the animals around these parts have no brain at all, only grey fluff that’s blown into their heads by mistake.

“So what?” said Tigger.  “If anything I should thank him for imagining me and letting me have so much fun while I’m here.”  He bounced away as happy as can be.  I would kill to be that oblivious.  Ignorance is bliss…or so they say.

If my suspicion is true then I’m afraid I’ll never be emancipated from my Creator.  Even if I was released and made “real,” whatever that means, what type of new world would I be thrown into?  How do I know that the new reality would be any better than this one?

I suppose all I can do now is take Tigger’s advice.  I’ll go up to Christopher Robin, the child who presumably directs my destiny with his whims and fancies, and just say:

Thanks for noticing me.

P.S. – I have found some joy in the fact that I am now able to write legibly with hooves.  But this writing business. Pencils and what-not. Over-rated, if you ask me. Silly stuff. Nothing in it.